A few from "Twin Peaks"

Anyone who knows me well knows how much I love the work of David Lynch, whom I consider to be a major inspiration. A true Renaissance Man in the world of art, equally loved and loathed; a painter, filmmaker, cartoonist, musician, photographer, furniture builder (what else have I forgotten?) So when he made a tv series, Twin Peaks, in 1990, I was entranced.... again, as in his 1986 movie Blue Velvet, his themes concerned the placid exteriors of small town America, and the strange undercurrents and layers of good, evil, quirkiness, terror, and just the general joy of the mysteries of life. His movies are always a visual and aural delight, brimming with mood and atmosphere and generally considered "weird" by most people....oftentimes justifiably, sometimes not.
One summer in 1992, after the cancellation of the series, I decided to take a weekend trip to visit the town where the show's pilot was filmed and the locations that inspired the fictional setting of Twin Peaks, a town in the northwestern-most corner of the state of Washington...mere miles from the Idaho and Canadian borders, near the mysterious fiction Ghostwood Forest, home of strange and dark things beyond our comprehension.
The real locations were set in the towns of Snoqualmie, North Bend, and Falls City, about an hour east of Seattle/Tacoma. I thought that at the very least I would get a shot in the arm of inspiration in finding subject matter for the paintings I love doing. I hit the Mother Lode, unknowingly scheduling my trip for a weekend when the first Annual Twin Peaks Festival was taking place. It was a HUGE event, attracting thousands of visitors and the press, and the entire weekend was full of activities and events geared for Twin Peaks addicts. I got to meet stars from the series and the upcoming prequel movie, Twin Peaks: Fire Walk With Me, visited many of the locations used, ate most of my meals at the diner from the the show (called the RR Diner on the show, its real name was the Mar-T Cafe, and served as the central gathering place for many fans)... I even bought a prop from a flea market that was used as a set decoration in the movie when the production company was in town several months earlier (a coffee percolator, a perfect memento from "Twin Peaks", seeing how coffee played such a large and endearing part in the series)
I returned home with great memories, souvenirs, and a ton of pictures that would form the basis and inspiration to create some paintings of the subject matter I became enamored with, the haunted remnants of small-town existence of the early to mid 20th century in America.
The paintings I made are from the environs of Snoqualmie and North Bend, not necessarily locations from the show, but a couple that I did certainly are. These are some of those paintings. All of them sold in my gallery in the mid-90's.


Actually, this one is from a prior visit to the northwest, and I'm throwing this one in, because it fits the tone of the series nicely. The scene I took this from was in Washington, near Mt. St. Helens.

"Untitled Waitresses"  1993  Acrylic on Canvas, 10" x 30"
This one was from the interior of the Mar-T Cafe, setting of the show's RR Diner. Very funky little coffee shop full of unforced homespun charm, the waitresses and management were always a joy to talk with during our visits.

"Meadowbrook and Park"  1993   Acrylic on Canvas, 36" x 72".
This intersection was in Snoqualmie, and was the location of a very weird scene from the movie Twin Peaks: Fire Walk With Me. This was a HUGE painting, and took some time, obviously.The detailing involving the bricks was an act of madness! I used a thick gel compound as the base for those, and inscribed the areas for the mortar in between with a toothpick, and used multiple washes of color afterward to get the right color, tones, and shadows.

"One-Eyed Truck"   1994   Acrylic on Canvas, 12" x 18"
The name is a play on a location from Twin Peaks, a nearby Canadian brothel named "One-Eyed Jack's". This scene was near Meadowbrook and Park, a block or so away from the location in the painting above this one.

"The Motel Office and the Lazy Dog"   1993   Acrylic on Canvas, 36" x 48"
This scenario was at what was then called the Mt. Si Motel, used in the movie Twin Peaks: Fire Walk With Me as "The Blue Diamond Motel". This painting was always a personal favorite of mine.
I did one other painting from the immediate area that I used as a Christmas Card, and if I ever find the image, I'll upload it.

EDIT.... My friend Jeff Flint just saw this post and sent me several jpegs of Christmas Card images I made back in the day, and here it is.... the actual location was along a frontage road east of North Bend, near the Mt. Si Motel. I needed to make a Christmas Card image in a hurry, so I chose a pic of the mobile home with pink flamingoes as my inspiration to paint from, embellishing it with Xmas lights.  Ho Ho Ho!


(My apologies for the blurred image, but it's pretty much all that I could get. Thanks very much, Jeff! I'll post the other Xmas images when it gets closer to December.)

I've had this on my plate for a long time, and finally have made some huge progress on it. I started it over twice, after not feeling it, and now, in this iteration, am finally feeling it. It's mainly a painting from memory, recalling a nighttime drive when I was living on the Olympic Peninsula when I was fourteen.... driving through the woods, we came upon a flat, clear stretch of  marshy meadows that led back into more woods. Completely isolated in this scene was a lone house, the creepy kind you see sitting all alone, in serious need of a paint job, and with a few dead trees around it, everything dilapidated...but with signs of someone still living in it.

That's the feeling I am working off of for this painting, operative word being "feeling", because the other versions before this didn't have it.

A painting from 1997, this is of Lake Tuendae at Zzyzx Mineral Springs....found at the end of Zzyzx Road, the mysterious exit on Interstate 15, between Barstow and Las Vegas. 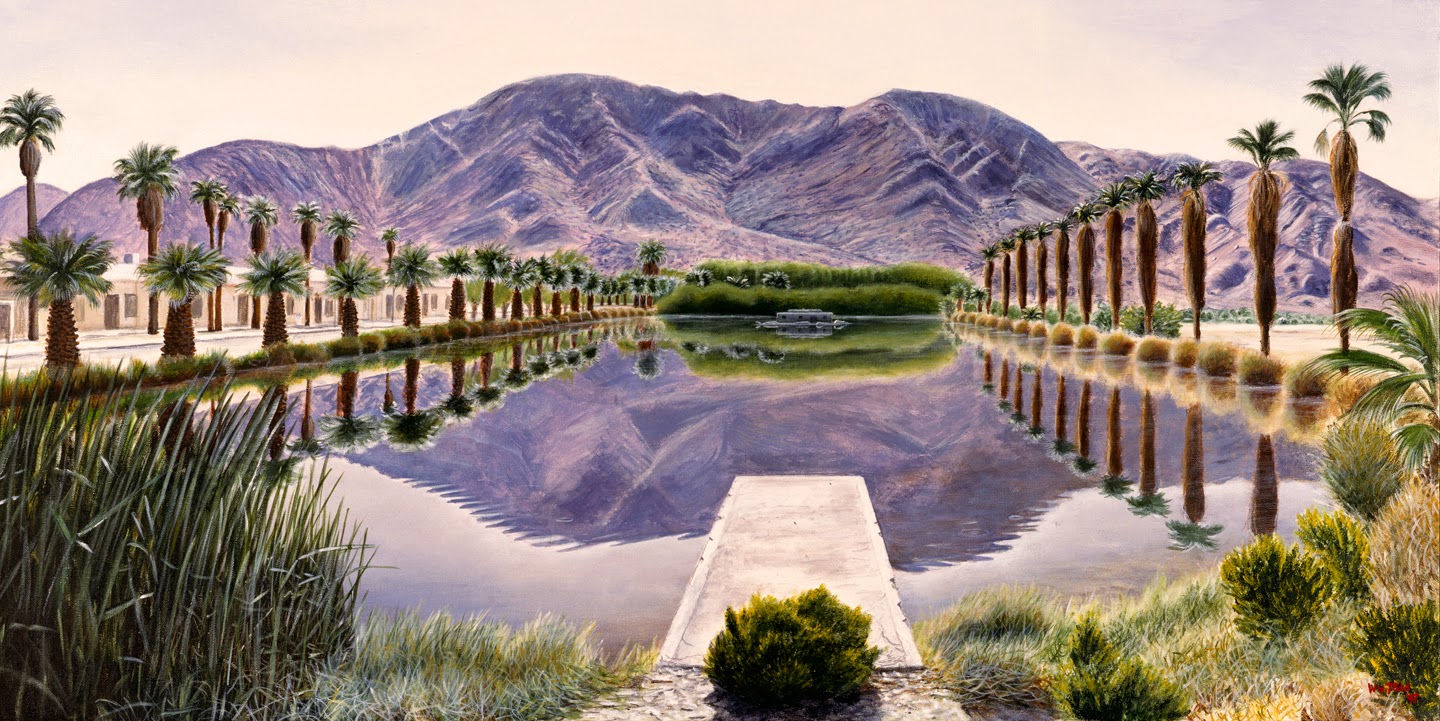 Winchester, California.... Nothing remarkable about the place, as I mentioned in a previous entry, just a small town on the outskirts of a small town.

This one is a repeat from a previous blog entry (last August), but since it's in Winchester, I thought I would group it with this current batch.

Wow, it's been forever and a day since making any entries here! My apologies....I had a dream job drop into my life, and it's taken front seat to everything, including painting, but with this job I think I may have bought myself some time to devote JUST to painting for a few months. We'll see. I was doing graphic design for a major restaurant's website, headquartered just a few miles away from my studio. It started in August, and the workload increased, and the website finally launched on the 21st of this month.
http://elpolloloco.com
I still have a few small tasks here and there, and the job will slow down to a trickle, and I can get back to the paint and canvas. I'm going a little stir crazy for it, too!
Cheers~
Bill
Posted by WmTodd at 9:41 PM No comments:

Earlier today I finished the painting, with some reservations. I'm pleased that the persons I did this for enjoyed it, though. There are many things I am satisfied with as well as a few that I would have done a little differently, but sometimes you just have to commit and move forward, especially if there is a deadline looming ahead, self-imposed or otherwise.

This painting looks better in person. I need to find a better camera, or learn to become a better photographer, or both.  Something a photograph can't seem to capture, though, is the translucency of the paint.
This painting was built up from a charcoal sketch that I fixed into place with brushings of glear gesso. I then added layer after layer of transparent acrylic glazes, some of them iridescent. The orange glow on the horizon, when seen in person, just pops, and the layers of glaze are much richer. It takes awhile for some of the darks within darks to register, and there is definitely a looseness to the brush strokes that I want to explore even further.
I decided against using an image from Faster, Pussycat! Kill! Kill! as the movie image, but I am not 100% satisfied with what I did choose, fantastic movie moment that it is. I gave a lot of thought over what image to use, and given the wherewithal, would have probably spent another week just mulling that over. In retrospect, I would have preferred to use something much more unidentifiable and incidental, instead of an iconic scene like this (Grace Kelly and Jimmy Stewart).

The wonderful thing is, I can always do it again.
Posted by WmTodd at 11:19 PM 2 comments:

Back to the Drawing Board.

I've started the painting over again. Something wasn't quite clicking with me to begin with, on it, and as work progressed, I encountered a technical snafu....
I layered on a dark blue base over the pearlescent base,  but after attempting a second coat the whole thing started wrinkling and crackling. Fine if you want a distressed look, but not for this. Instead of creating a bigger mess, I just got another canvas and started over, this time paying attention to things that were still nagging me after I started painting. THIS time.... I sketched out everything in charcoal, rethinking some areas..... The foreground street is higher and less pronounced, so now we're looking at the drive-in from across the street, as if we have stepped back about 20 feet. The distant elements are pretty much the same in size and relationships, but now there is a telephone pole and an old phone booth in the foreground. At the far right is the ticket office and the driveway leading up to it. My intention is to still have everything shrouded in darkness, the fence surrounding the drive-in full of missing panels and holes, and to still have lights on the distant horizon.
AND, to have a movie mysteriously flickering on the old, weathered screen.
Before the paint started delaminating, here is what I had, and I wasn't feeling it, even if it was at an early stage:

Starting over, everything was laid out without any questioning or "winging it" this time. Now I feel like I am on the right track. Everything here is in charcoal, and set with a brushing over of glear gesso so it doesn't smear or get erased. The painting is going to be so dark that these marks will not be an issue.